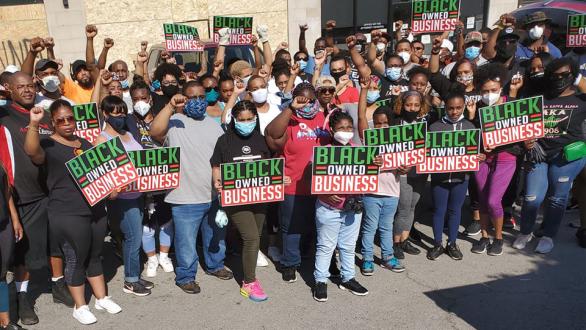 #CrisisProvesCharacter: How REAL is your community during crisis?

There’s a saying that goes “when you own something, you’ll take better care of it.” The killing of George Floyd has sparked national and international protest but it has also given way to opportunists that have vandalized and looted local businesses. It began to hit close to home on Chicago’s Southside for real estate broker Whitney Hampton. “It was really heartbreaking to see,” says Hampton, and “I had to do something.” Seeking to counter the negativity and “help the community heal, “she put out a call on social media and the village did not let her down. “There were so many from the real estate community that stopped what they were doing for the entire week to come out and help the community,” Hampton says. With 60 volunteers, 35 businesses were boarded up and she’s raised over $10,000 to assist in her efforts. In addition to that, she has delivered groceries to 300 seniors, provided items to 125 single mothers, and launched the Facebook group, CleanOut and BoardUp 2020, that has over 1,700 members. The action of Whitney has helped restore the village and she should be applauded for her commitment. You can learn more about Whitney and her story at https://magazine.realtor/…/this-is-heartbreaking-i-needed-t… or join the group at https://www.facebook.com/groups/295732448132488